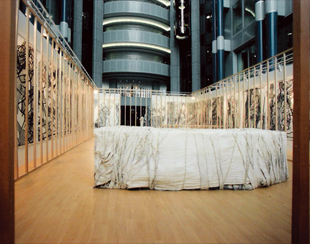 The exhibition is a huge installation under the name of ‘Now you see, Now you don’t’, and has won unprecedented success.

Sheinman is one of the few women who make up the list of presenters at the prestigious German Bank, and the only Israeli women to have” infiltrated” this bank  “Museum”. The fact that the exhibition took place in the German bank is considered an impressive achievement on an international level, due it being one of the biggest banks in Germany and which sees art as one of the most important principles on which Its business image is based.

Her new fantasy was to work in a large scale. To go on one creation, “as big as possible :” After working a few months on models which displayed the new creative direction that “burned in her bones”, Sheinman searched for a suitable site in large Museum outside Israel’s borders. She soon found that the large Banks in Germany also serve as museum, art collectors and sponsors for artists. “every prestigious bank in Germany has a treasury Department. This is   tradition that exists in all of Europe within the framework of the openness to art and the will to grant a stage for artists.

Daniella labored on the creation for over two years. She adapted her statement to the unique structure of the building, and for this purpose planned a rectangular wooden form that was constructed in the center of the hall and which contained the creation. From every level of the building it was possible to look into the inner hall of the installation, in which 40 huge drawings on canvas were rolled out on 70 meters of wall in succession. Along the full length of the cloth daniella drew in graphite shades of black and white, huge drawings describing stories of life, struggle, fermentation, dynamics and movement. The dra

wn on cloth is a kind of long scroll which expressed as almost bothering reality, sharp and intricate.

The whole installation described the essence of man’s existence, the “caged’ in which he lives and the partitions or lack of them, between him and death or infinity – the observer, is left to take part in the “freedom of the game”. Instead of being passive, you are forced to participate in the play. The observer can only see the drawings via the cages. Indeed he could step into the perspective. Therefore, the observer can never see the whole play at once – and he is constantly left in a “now you see, now you don’t” situation.

This time, having being able to express herself without the use of color, she feels great relief:” This was crazy work, real physical work”. It is very difficult to penetrate lead into canvas. I sat on the canvas and used a lot of energy for two whole years. I wanted to describe reality as it is, colorless, gray, sharp, undercoated, even hard. I decided not to use color because color has in it much softness and fanciness, and these factors distort reality.

Sheinman stubborn determined and decisive, admits that this exhibition was an exciting climax, one of the high peaks in her artistic career.