It’s all in black and white 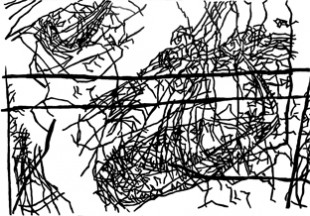 Sheinman’s artistic career follows the process she has undergone in her personal life: unraveling the truth from the tangle of secrets and lies of her childhood.

The Museum of Israeli art in Ramat Gan is showing Sheinman’s recent work, done over the last three years, in which her compact artistic language has reached a peak.

Sheinman studied at the Avni institute under Yehezkel Streichman and moshe Sternschuss, later abandoning figurative art for the abstract, under the tutelage of Chaim kiewe. The current exhibit consists of enormous stretches of canvas covered with squiggles in black graphite. No figures, no colors. Just black lines on white canvas.