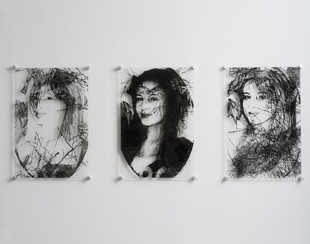 In Ovid’s Metamorphoses, the goddess Minerva (the Greek deity of war and wisdom as well as the patron of weaving and embroidery) takes exception to the hubris of the mortal Arachne, a poor country girl who defiantly claims to be the superior weaver. Minerva, disguised as an old woman, appears to Arachne and suggests that the mortal offer forgiveness. When Arachne boastfully refuses, Minerva reveals herself and challenges the girl to a weaving contest. Minerva weaves a tapestry that depicts scenes of the greatness of the gods, including her own victory over Neptune. Arachne’s tapestry illustrates a much different point of view: a skillfully woven portrait of gods raping and deceiving humans. Minerva flies into a rage over Arachne’s skill and beats her, prompting the mortal to hang herself, and Minerva eventually turns Arachne into a spider, thus relegating her to a life of spinning webs. Ovid writes of this moment:

Arachne’s hair flowed away and with them both (her) nose and ears,

and (her) head becomes very small, she is also small in her whole body;

slender fingers cling on (her) side in place of legs, (her) belly occupies

the rest: from which, nevertheless, that (girl) lets out a thread, and the

Minerva wins this epic tale and hopes that when humans would learn about Arachne’s fate, they would revere the mighty gods, In other versions of the story Minerva wins the tapestry contest with a far superior work, causing Arachne to be ashamed; Minerva takes pity on Arachne and turns her into spider so that she can continue to spin and weave for infinity. In both versions, the reader finds the Manichean theme of man versus god, the capriciousness of fate, as well as the internal struggles of the creative process.

Daniella Sheinman, an artist based in Tel Aviv, whose work has rejected color for the past twenty-one years. Sheinman also creates portraiture of female subject matter, albeit more specific than Self’s, for this exhibition, presenting three works that begin as small black and white drawings that are transferred to ceramic painting on glass. Untitled (My Mona Lisa I, II and III) are portraits

of her granddaughter created in 2015. All three works use an interior oval compositional structure to visually contain the portraits of the young woman: in each piece she is seen drawn, in ceramic printing on glass panels, from the bust up in black on a white surface, in the same pose as Leonardo da Vinci’s infamous heroin. While in Untitled (My Mona Lisa II and III) the viewer sees the woman as timeless, Untitled (My Mona Lisa I) includes the young woman wearing a logo sweatshirt, signaling her existence within a contemporary era. The titles are a nod to the artist’s affection for her progeny, elevating her from a typical young woman to one of the most mysterious and captivating figures in the history of art.

In each work the oval structures are disrupted by an overlay of erratic lines that may be read as web-like in places and landscape elements in others. In addition to obscuring some of the facial details in the works, this overlay of abstract lines disrupts the discreteness of the oval shaped portraits. The oval portraits are direct references to both the history of portrait and miniature painting, as mentioned above. Sheinman seems to call her subjects from another historical epoch, suggesting these are women of importance; however, she disturbs the sanctity of the portraiture with the web of lines, which is a typical motif of her work in painting as well as sculpture. Like Rauschenberg’s erased de Kooning, she obliterates her own handiwork, suggesting the process of reworking and rethinking the composition. One literally sees the angst and vulnerability of the creative process in the works—the ebb and flow of creative confidence and deflation. Using what appears at first to be straightforward portraiture, the artist tells the story of the creative process, as well as the story of women’s achievement, both past and present.