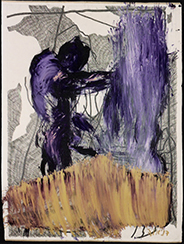 If one looks carefully on Daniella sheinman’s paintings, it will be discovered, sooner or later, that the “couple interaction” at the core of her work is the expulsion from the Garden of Eden, not the event itself but, as the learned observer knows, that of the Renaissance artist Masaccio, wich was part of the famous fresco cycle wich he painted in the Brancacci Chapel in Florence in 1427.

There is no doubt that this is one of the most forceful paintings produced by the west, but this is not the place to present Masaccio’s full importance. It is obvious that Masaccio gave, especially to painting, a new kind of monumentalism and force, and a special presence and physical mass.  He presented a proposition for painting which was then considered less monumental and thus of less importance as a medium than sculpture. But Masaccio is important not only for the formal aspect of his assertion, but also the engrossing psychological and human description of the new man, his feelings  of frustration and pain, fully exposed and vulnerable in his nudity. Flesh and blood. Masaccio’s expulsion scene, perhaps more than any other expulsion scene, presents the psychological dimension which he brought to the renewed painting of the Italian Renaissance. The scene has great force and it is not surprising that even an artist such as  the “divine” Michelangelo  was influenced by it when he  himself approached the subject. It is therefore e possible to view this scene by Masaccio as man looking at himself, as a born again child expelled from the giant’s garden if to relate to Oscar wild’s story and thus to modern iconography.

In short when Daniella Sheinman chose this scene her choice was intuitive and correct. Indeed her relation to the biblical scene which has a defined Jewish/Christian meanings, is a rather personal connection, modern, and far from theology and religion. Quoting from the past in general, and particularly today, is a recognized and common practice. In post modernist terms it is an appropriation- the use of cultural property for her own purposes. Furthermore, the use of appropriation for “cultural” or fashion purpose is far from Sheinman, who connected with the scene through its drawings- the power of the image and its depth in humanist and expressive terms. She related to classic scene despite the Post modern stimulatory paradigm and not because of it. She connects to the content of the scene, and the resultant series she terms” Couple interaction”. On the one hand  this is almost a clinical definition , but on the other hand  for her the expulsion from the garden of Eden was  an archetypal/ personal event  in which  the subject is not  the expulsion as a separation from god, rather the relationship between the two people  expelled , between themselves is the subject which as  a result  of the expulsion presented  them with a ” fallen” grey reality, a wizening which they rather , and Sheinman understood and internalized the scene in her own unique way.

At this point I would like to stop the first impression in the works and review briefly  Sheinman’s past and the not so simple road which brought her to the complex an crystallized point which she arrived at with series of paintings presented in this exhibition.  In general I wish to emphasize Sheinmans’s special authenticity and. Maybe, even her personal naivete, and to stress them as point of merit, possibly an essential  part of her own since there is in them an unpretentious faithfulness to herself- an important  and all too often forgotten asset. This unreserved faithfulness to herself can be seen in her development and her educational path which is very long; and perhaps even in her development in measured steps. 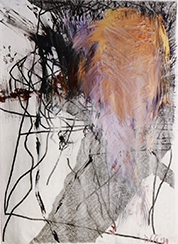 It is therefore also clear that at that stage  the modernist liberalization, in the broadest and most general sense – the modernist agenda , and if only for example  as a step in the face to bourgeois taste, all this did not take up much place in her world.

What is no less important to our story is that Sheinman was very aware that something was missing. She understood that almost everything she learned had not really brought her close to art and creation. In her own eyes she was not a painter, feeling that she was standing in front of a wall which she needed to break down.

Her meeting with Kiwe was formative and it extricated her from the situation she was in, her slumber in all that was related to modernism. The summary of what Kiwe suggested to her she describes in one simple sentence” Begin to play”. This fundamental suggestion, meaning the introduction of play into her world and her art which had become cemented in her knowledge of tradition, is exactly what she needed.  Her accumulated knowledge was totally foreign and disconnected from her personality and her world and from her need to express herself.

Sheinman was ready and open to this suggestion. In any event and not only on the personal psychological level, but also on theoretical level, playing is undoubtedly one of the fundamentals of the modernist paradigm. The cubists, for example played with “play blocks” and even dice appear in their paintings. They insisted that painting and pictorial investigation have a serious basis in play. This was a way of thought and a way of work, almost a way of life. Their influence in this matter was enormous. Thus their e is no wonder  that the philosopher  Ortega Y. Gasset , in his article  ” The Dehumanization of the Art”(Madrid 1925), an article  that can be seen as  a self examination, after a quarter  of a century of early modernism, counted play as one of the fundamental values of modernism. The place of play in modern art was from its beginning central. Kiwe’s suggestion to Sheinman, which was in fact her first connection to modernism, was also the point where she began her personal and artistic liberation.