Pushed from Paradise into Chaos 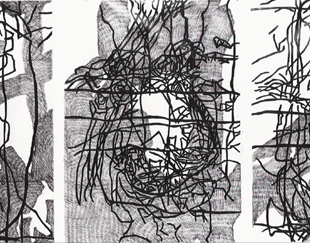 The Installation “Interior space” of the Israeli artist Daniella Sheinman, who “captivates” the observer in the Ludwig Museum. When he has entered the room, he is already part of the slat labyrinth, which seems to want to keep him away from friezes of unusual monumental drawings on the walls – and forces him together with them which shows him his path, but when blocks this way with obstacles and barricades which restricts him like a prison- but also leaves him all freedom, also the one of the view.

Out of this silence the observer as well as the artist find back from destruction to a peaceful together, out of which new life starts. Is there a return to paradise after such a lot of sorrow? After so much fight a idyllic happy end? This would then be too hypocritical. And that is why Daniella Sheinman steers in another direction again, breaks up the idyll – Breaking up, which leads back to the beginning – end, which is beginning again.