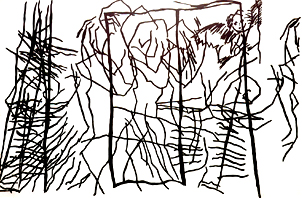 In her 1991 painting Mythical Clouds, Daniella Sheinman depicted her soldier son with a storm of expressive color stains and wiggly black lines raging around him.

At the bottom of the work she drew hands dragging smears of red paint.

Sketched on young soldier’s chest was a square black outline, and in it – a curved spiral. While this pattern recurs throughout the work, running across it like an ornament – design, when it is thus delineated on the soldier’s chest it looks like a target. Feeling of anxiety and chaos bustle around the son’s painted figure; these combine with the knowledge about the atrocities and horrors that engulf him, making him a part of them. The painterly affinity between those interwoven arrays of dense black lines sprouting in the 1991 piece Mythical Clouds and the current works featured in this show is formally conspicuous, despite a manifest reduction that distinguishes between those past works and the present ones. The female point of view – the mother’s cry vis -a vis her son’s whereabouts- leads in the current works to the obliteration of narrative (the son’s figure), color (the expressive articulation) and texture. This may attest to the artist’s having arrived at a stage of meticulous exhaustion of her work process, or perhaps indicate that the anxiety of loss is almost indescribable.

At first sight, it is perhaps surprising to tie Daniella Sheinman’s large scale works, which embed intersected arrays of thickened graphite lines, with embroidery or lace works (which, in our consciousness , are perceived rather as intimate works incorporating threads or other fibers) In this essay I will attempt to indicate the similarities between the artist’s work procedure and elements contained in her pieces, and the mode of work of those practicing the crafts of  embroidery, needlepoint or lacework. It ought to stressed that at the end of the process, the common denominator linking Sheinman’s work to the traditional model is entirely unstitched- an unraveling that leads to the creation of a unique mode of work.

Despite the similarities outlined between laceworks and Sheinman’s pieces, It is evident that the artist adopts the traditional model only ostensibly. The similar work procedures in fact emphasize the process of unstitching, aimed at forming a different language of expression while rejecting the place at which the work supposedly belongs. In Greek mythology, in the story of Odysseu’s return home from his journeys, it is told how during his long absence, every night, his wife Penelope (who was what we now call ‘grass widow’) used to secretly unravel what she had woven during the day; thus she managed to avoid fulfilling her promise to marry one of her suitors after she  finished weaving a shroud for her father in law, laertes. Penelope used the traditional tools at her disposal; by shrewdly shifting them from their customary role, how ever, via the act of unraveling, they granted her the power to influence her fate, or at least suspend and deflect it slightly from its foreseen course.

In her work, Sheinman employs seemingly familiar and non threatening contexts (female crafts, or the e’ art of drawing’), and yet changes the customary variables within them. This is evident, for example, in her choice of a large format as a basis for the work; In the use of drawn rather than real threads; in the fact that the drawing is executed on a canvas originally intended for painting in oil or acrylic; and in the drawing that is devoid of  the ‘sensitivity’ or ‘vibration’ of the pencil line. The variables’ shifting challenges the traditional model, the mode of work that was presumably designated for her and predicated. Moreover, drawing performed on canvas on such a large scale is inevitably invested, to some extent, with a show of force. The act of drawing, which is usually perceived as a ‘sensitive and intimate’ form of expression, goes beyond that, becoming defiant, while working taking over the entire scope of the display space. One must note that in her previous exhibitions at the National Maritime Museum in Haifa (1997) and the Ludwig Museum im deutschherrenhaus in Germany (1999), Sheinman combined wooden constructions and sculptural objects that together formed a total three dimensional installation. These installations, like stages-sets, accentuated the architectural potential concealed in the drawings. The dimensions of the works and the artist’s work regime transformed the act of drawing into an obsessive physical act, burdensome and painful. The use of a lump of lead – a highly toxic substance-conceals the potential of danger and death. The lines twisting on the canvas resemble a latticework of wires, an unraveled net, or a torn fence. It seems that nothing in common has remained between the pricky gray lines and the delicate, soft lace napkins.

In his book, the periodic Table Primo Levi describes the qualities of lead through the character of Rodmund, the lead – prospector: “lead is actually the metal of death: because it brings on death, because its weight is a desire to fall, and to fall is a property of corpses, because its very color is dulled dead, because it is the metal of planet Tuisto, which is slowest of the planets, that is the planet of dead. I also told him that, in my opinion, lead is a material different from all other materials, a metal which you feel is tired, perhaps tired of transforming itself and that does not want to transform itself anymore: the ashes of who knows how many other elements full of life, which thousands upon thousands of years ago were burned  in their own fire”.

Sheinman indeed rejects any interpretation that ties her work to the memory of the holocaust, and yet a sense of imminent nullity and death is inevitable in view of these works. A closer look at her earlier piece Mythical Clouds, mentioned at the beginning of this essay, takes us back to the battlefield. Through assiduous diligence the artist traces upon lines, like fire -brands that encircle and close in on the viewer. She spins her private story as a women and a mother, with its various textures, recounting it within a public display space.