Ugo Rundinone at the Sommer Contemporary Art Gallery, Daniella Sheinman at the Litvak, and a group show at Alon Segev

From: The Window, an art blog by Smadar Sheffi. Originally posted on September 7, 2013 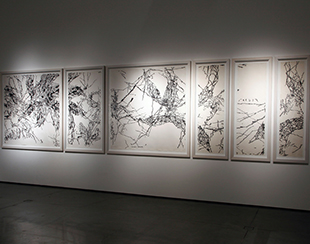 Daniella Sheinman’s installation, String Line (exhibited along with a small video installation by Nivi Alroy) reflects the Litvak Gallery’s change in direction, as well as denoting a significant development in Sheinman’s oeuvre. Her language has undergone a process of reduction and distillation. Stripped of human figures and color, Sheinman develops systems of black lines, which she also used in the past, into complex meshes. They refer perhaps to nature, recognizable as landscape (bushes and trees) or perhaps cellular structures, hugely enlarged. She draws with graphite on canvas and paper, and, together with cylinders made of plexiglas set up in the gallery, has created a formal, non-narrative space with momentum, interest, and a great degree of elegance.

A very large painting (10m of canvas) unfurled in the long, rectangular gallery space features interwoven graphite lines creating the feeling of fleeting landscapes as if on a journey, in a black and white film, or a distant memory. The work in graphite is precise, with the pressure invested in the work and its changing shades of black visible at a closer look. The thicket image is associated with a forest, concealment, safety and danger. In the Israeli context, Holocaust memory is unavoidable, similar to works by Ori Gersht, Nir Evron, and Yehudit Sasportas, who over the past decade, engaged in the image of the forest. The eight plexiglas “pillars” in the exhibit are objects of beauty with an elusive quality. They are dispersed throughout the gallery in such a way that some are revealed only by walking through the space. pillars are revealed partially only by walking through the space. Digital prints of linear drawings of labyrinthine forms are printed on the plexiglas. Their transparency is illusionary:  the tall pillars cache a secret, sealing off the option for the gaze to wander. The more one remains in the space, the more a dark, chaotic feeling arises despite the initial impression of brightness.  Another work on a long scroll of paper is installed at the gallery entrance in a niche at a height of more than 3m. Its format brings the calligraphic feeling to the fore. It is interesting to see how Sheinman’s work suggests links to artists influenced by the American Abstract Expressionist Franz Kline, such as Brice Marden, and, in a certain sense, Cy Twombly (who passed away two years ago).

The exhibition seems to be a contemplation of emptiness and transparency, an expression which has become a “buzz word,” and paradoxically so, since privacy, on nearly every level, has become a thing of the past. “Transparency” now involves a flooding of data which often confuses more than it clarifies.